5. copying and collecting
Are we all just a collection of pinterest boards? 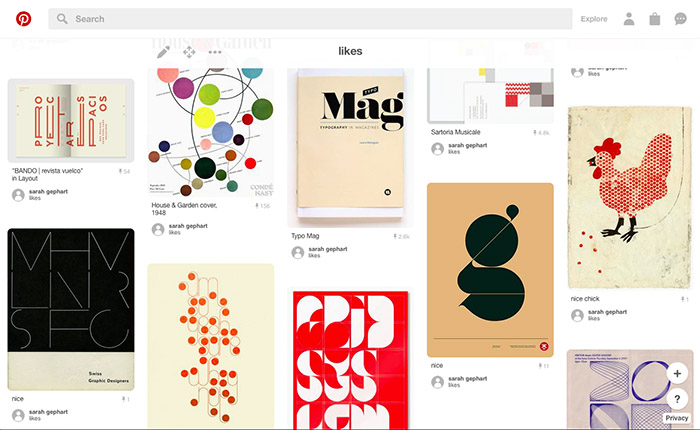 above is a screenshot of a pinterest board i started a few years ago. i am a haphazard pinterest-er -- honestly, at first i thought it was just a site for brides-to-be to plan their weddings. it was started in 2010 as a site for users to save, categorize, and share images on different ‘boards.’ by the end of 2011, the site had become one of the top 10 largest social network services, according to Hitwise data, with 11 million total visits per week (copying some facts from wikipedia here...). i have strong misgivings about the website, but i have to admit i have used it to share ideas about projects with the studio and clients. is there anything fundamentally wrong with the site? we are constantly defining ourselves by our likes and dislikes; by the clothing, books, products, and food we consume. by collecting images and sharing on a website, we show a snapshot of who we are. i think the problem is the consumer mentality promoted by pinterest and that it is all too easy to simply tag things that are then aggregated onto pages where the original author and context is lost. one problem is how mood boards -- the precursor to pinterest boards, where designers would collect inspiration for new work -- often end up as menu boards for clients. the images collected are not viewed as reference points for new ideas, but as ready to use elements.

as a side note, i wonder if when you are piecing together ideas and inspiration from a range of sources if there is an okay number of things to pull from -- for instance, direct inspiration from one source sounds dubious, but if you mash together two things is that okay? or is it safer to use three? 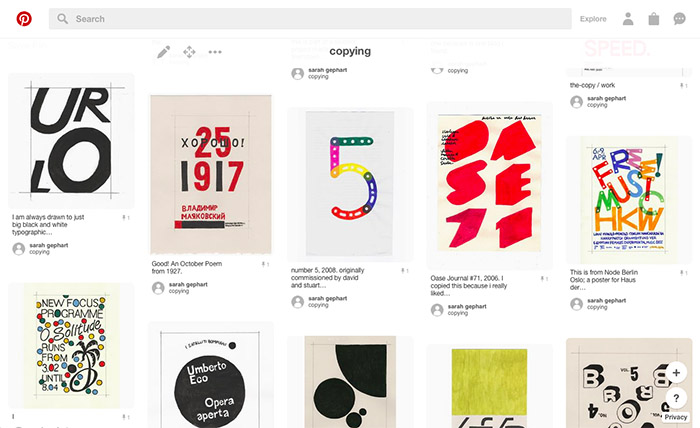 after working on this project for awhile, i thought it would be fun to put scans of my copied pieces up on pinterest -- recirculating them into the stream of digital content. above is a screenshot of my copying board. its funny now to see how similar my ‘likes’ board and my ‘copying’ board are. in many ways the project seems to function as a slow-motion pinterest board -- where the attention of hand copying allows me to more thoroughly understand and embody a piece of graphic design versus the usual one-click collection. i’m not sure Walter Benjamin was thinking about this when he wrote “Every day the urge grows stronger to get hold of an object at very close range by way of its likeness, its reproduction.” (from ‘The Work of Art in the Age of Mechanical Reproduction,’) but the quote resonates with me. by hand copying pieces of design, i get close to them, understand them better, and actually physically own them. by scanning and posting the images of the copies, they are inserted back into the fluidity of the digital world. i wonder if they will start to be tagged and copied and have a life of their own. 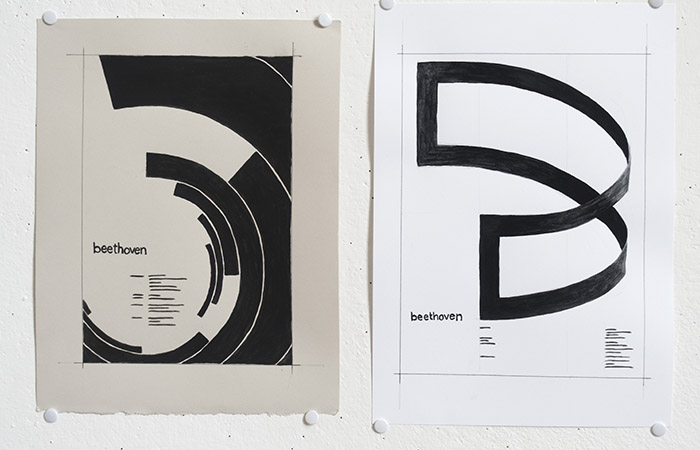 once images have been posted and start to circulate, google image search often adds to the confusion of author and context. above is a funny example of this that i found while searching for images of Josef Muller-Brockmann’s work. while a student at Yale, Jessica Svendsen, did a project where she remade (interpreted, not copied) Muller-Brockmann’s Beethoven poster every day for 100 days. she posted these on-line and evidently they became quite popular judging from the number of links and mentions of the project. so now, when you google “josef muller-brockmann beethoven” you are just as likely to get an image of Jessica’s project as the original poster. 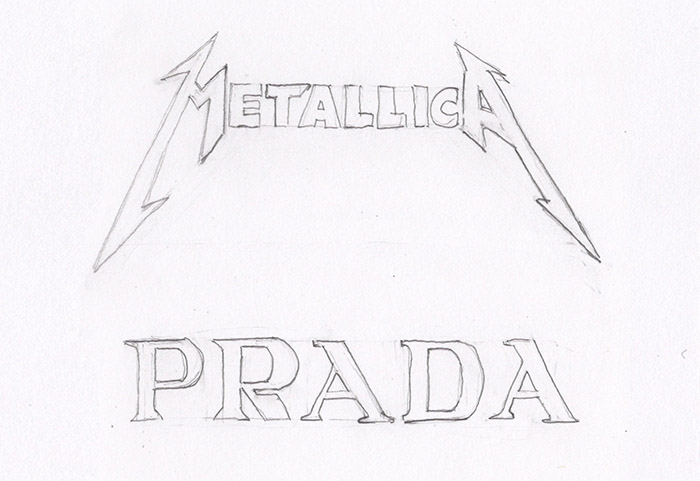 after i gave a recent slide talk, a friend mentioned to me how much this project reminded him of high-school and copying band logos into his notebooks. how the act of copying functions as a way of identifying yourself with a band and a certain type of music and lifestyle. it’s true, i embarrassingly remember so clearly copying Jackson Browne, Lawyers in Love on my social studies book. so then i tried to think what a contemporary copying act might be for my older self, not a logo of the music i listen to but what life-style logo i would want to identify myself with -- prada came to mind -- not seriously of course (or maybe, sort of...). Metallica is there to reference the imagined high-schooler -- it stayed because i just loved the way the two logos looked together. 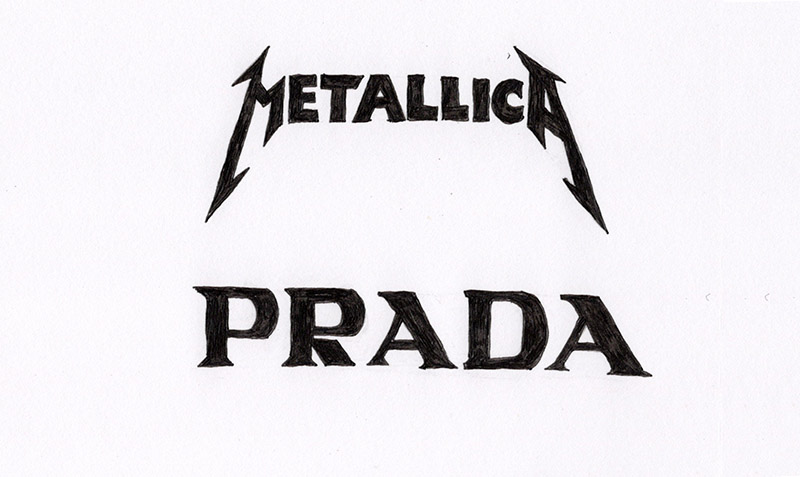 a true fan would copy the logo multiple times on any surface, with any writing implement. after truly embodying the logo, you wouldn’t need to see the original any more, you would just know how to draw it by heart. so through a collection of logo copies, you start to form an identity. my second attempt, above, was from looking at the first pencil drawing. the funny thing about prada is that as an expensive fashion brand it wants to be simultaneously ubiquitous and unattainable. by clumsily copying the logo i maintain the cult status of the brand while also highlighting my inability to actually own the brand... unless i go over to canal street to buy a knock-off, but that touches on another section in this exploration i have yet to write.

of course high-schoolers are not the only ones creating an identity through their copies. i’m thinking again about the roman copies of greek sculpture and their attempt to claim ownership to the narratives and prestige embodied in the sculptures. renaissance collectors also used classical copies to represent and define their identities which they would then have immortalized in “collector portraits.” above is a painting by Lorenzo Lotto, Portrait of Andrea Odoni, 1527, showing Odoni surrounded by works of art (image from the Serial/Portable Classic book). As Kathleen Christian writes in her essay “Bewteen reality and Representation: Portraits, Objects, and Collectors”:

We cannot doubt that Lotto’s portrait is deeply concerned with constructing the sitter’s identity, and its significance as a record of him for posterity should not be questioned. Allusions to Odoni’s persona can be read, for example, in the repetition of the figure of Hercules, a particularly appealing image for men in public office.”

later in her essay, she writes,

“The notion that these images are portraits of collectors has proven awkward on a practical level, since overly-direct links between sitters and the possessions displayed in the portraits can be misleading. Objects referenced visually in the background can only help determine the sitter’s identity to a limited extent. Even if an inventory of a collection can be found which names a particular object shown in the background of a portrait, the sitter need not necessarily be the owner of that collection, The sitter could instead be someone who owned a copy of the object, or who simply admired it.” so, like a high schooler’s copy of a band logo, the art in collector portraits could just be aspirational, or a way for the artist to show off their own virtuosity. 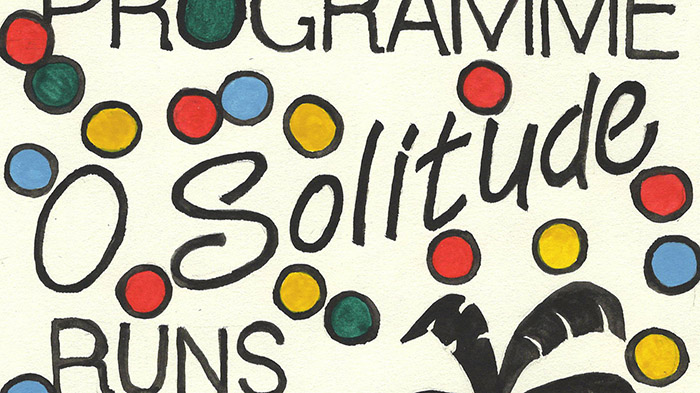 besides the act of copying working to form a personal collection, it also helps to define a community. with the decline of the hegemony of the swiss graphic design style, copying within groups of designers allows newer design communities to form. by copying styles from each other, we reach out and align ourselves with designers of a similar mindset and people we admire. as long as no one is specifically plagiarized, designers working in a particular style can push each other along pursuing a visual trend or approach. the drawbacks of course are complacency and short-cuts -- when copying happens out of lack of inspiration or time. 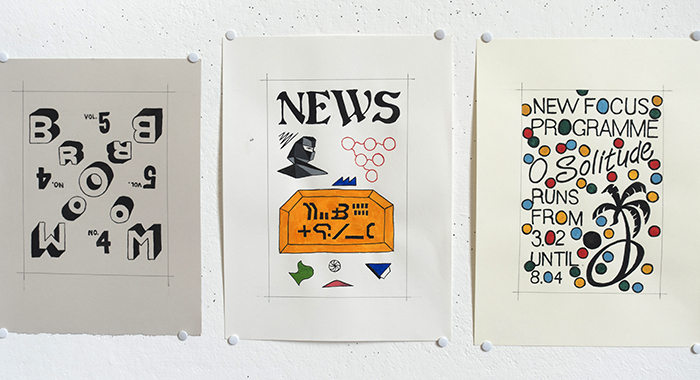